I’ve said before that I don’t really “get” John Harper’s Lady Blackbird, but it’s more accurate to say I don’t “get” the evangelism. Undoubtedly, it triumphs in conveying depth of setting in few words, with a simple system that compels decisive action, from an explosive inciting event. That’s not nothing, but it’s not the best game of the decade either. I thought it was fun, but that the system didn’t translate well outside Blackbird’s controlled environment, and felt no more inclined to replay one scenario than I would any other published adventure.

Released six years later, Magister Lor was precisely the next step I wanted. But like Lasers and Feelings, the shelf-life is limited. If you’re looking for a way to extend your Tales of the Wild Blue Yonder, I wouldn’t set aside longer than another four hours. 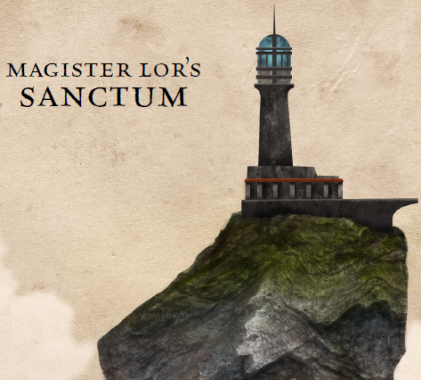 Magister Lor details the titular mystic’s battle with the recently freed daemon Setarra, and the siblings they’ve adopted as apprentices. Framing and player choice certainly impact the flow of events, but in all my games the “evil” twin Kel held the balance of power – standing firm, or betraying their daemonic master. The setting is more self-contained than Blackbird’s voyage of discovery, and consequently a good fit for a convention slot: not only does it run fine in two or three hours, that’s probably the best length for it. Obviously it’s also a PvP scenario, which means it ends with winners and losers. Whoever plays Setarra should probably prepare for a less than triumphant final act.

Blackbird’s “take a die for each identity/trait/tag” system was intuitive, elegant, and abusable by mischievous players. Harper has used the intervening years to make tweaks, and produced something that’s probably better balanced but definitely less intuitive. It’s not a deal-breaker, but it’s an inconvenience for a system that was praised for its short pick-up time. All the things I really liked about Blackbird – the keys that reward dramatic character choices, the refresh pools that encourage players to spend big rather than hoard resources – are still present and centre stage.

But what’s next? I’ve yet to give Lord Scurlock a try, which excitingly extends to a short campaign. But arguably, the Tales of the Wild Blue Yonder have run their course – a test bed for mechanics and themes that have since matured into Harper’s bigger, more complete games. Perhaps I should be looking elsewhere…