Two years ago, this might have gotten a rave review – a novel take on the emergent Fate engine, with diverse sub-systems to support many sessions of play. But now we live in the era of Fate Core, probably the most exciting RPG release of the last four years, which introduced so much clarity and consistency into the system as to make Fate-that-was feel woefully obsolete. Diaspora is not bad, but it’s not Fate Core, which lest we forget is available for free. Why indulge in the clunky eccentricities of Diaspora’s social conflict system, for example, when it’s managed so effortlessly by Fate Core? 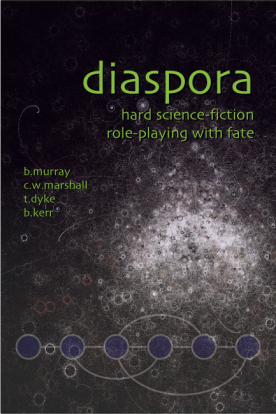 Even without this unflattering comparison, Diaspora has plenty of issues. The skill list is the worst of both worlds: incredibly long AND missing key options. Since there’s no obvious skill for leadership, deceit, lie detection or contacts, the judgement call of your GM here can make or break the game. For us, “Resolve” was the god-stat, seeming to be the most appropriate option for mental defence, bluffing, and providing an inspirational presence. Other skills of supposedly equal value include “Arts” and “Animal Handling”. Since skills are the basis for all of Fate’s action resolution, character imbalance is a reoccurring problem.

It’s still Fate though, which gives players a number of tools to help them find creative solutions with whatever skills they have. And character aspects, written from scratch rather than chosen from a list, empower players to choose what matters to the game in both a narrative and mechanical sense. All good stuff.

The best thing about the book is its chapter on setting generation, in which you build a cluster of space from scratch. Since the majority of the power here is delegated to the players, it means they’ll be playing in a setting largely of their own creation, heavily investing them from the get go. The dials here plug into the game’s “hard sci-fi” tone, which is equally prevalent throughout the rest of the book, with lots of ideas about how to make interstellar action “work” from a realism perspective. The hardness of the sci-fi is a mixed blessing. I’m not keen on a genre that spends more time saying what you can’t do than what you can.

My advice, check out the online SRD to give you ideas for space combat and cluster generation. Otherwise buy Fate Core.

One thought on “Mini-Review: Diaspora”