When I first heard about Fate Core, I wasn’t interested. I’d played Spirit of the Century, I’d played Diaspora – why buy the same system again with all the setting content removed? How foolish that sentiment seems now. Consistency and clarity became the design goals of the new Fate edition, and combined with not-insubstantial tweaks made to gameplay both central and peripheral, they have transformed something promising into the best RPG release of the last four years. 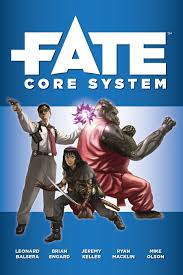 It almost seems pointless to list the game’s achievements, when anyone can download the book for free and find out for themselves. Though skills are the game’s core, resolving every action with a single roll against a flat or opposed difficulty, aspects are the juicy fruit around them. Each is a short phrase that describes something fundamental to a character’s identity; or to a scene, change in combat circumstances, or the game world beyond them. When an aspect is advantageous, characters can spend tokens for a bonus on their skill roll. When an aspect is disadvantageous, the GM can offer the character a token, whilst introducing a narrative complication.

Aspects work splendidly for many reasons. Firstly, the ebb and flow of the token economy is an excellent pacing mechanism, producing both heroic accomplishments (with big spends) and dramatic setbacks (when accepting rewards). Furthermore, treating the aspects of PCs, enemies, settings and combat arenas in exactly the same way makes the game incredibly easy to learn once that first level of understanding clicks. Finally, because players choose their character aspects freely, rather than select them from a list, it empowers players enormously to decide what part of the game world actually matters to them. In the hands of creative players, this can produce something magical indeed.

The more you put into Fate, the more you get out. It’s clearly designed to be hacked to suit the needs of its gaming group – one of the game’s first expansions was designed specifically for that purpose. To some, that’s a downside. Since the game has no setting of its own, it can feel a little flavourless, and it takes an experienced Fate gamer to design new content that doesn’t unbalance the game. Whilst I’m sympathetic to those criticisms, they contrast sharply with my own perspective. When the game is this good, expecting commitment from me is a compel I am happy to indulge.