Been busy recently – partially with some exciting RPG stuff I unfortunately can’t talk about right now – so today’s Ferrymen post is long overdue. My subject is the player party’s break-in to the Carthaginian Consultancy’s fortified headquarters, a dramatic set-piece from the end of our last arc, that had been foreshadowed from literally the first session of the game.

Undoubtedly, the impact of this moment was derived from the shared history of the player party leading up to the encounter. But the mechanics used to evoke the unique challenges of the heist played their part, I think, and a lot of that could be equally applicable to any GM preparing a heist or similar set-piece for a Fate game. What follows is partly mechanics, partly GM advice, but mostly just extrapolation of material from Fate Core. I hope that having it all in one place will nonetheless be a useful reference.

Ferrymen exists in a universe where FTL technology has been monopolised by a single system – Carthage – and that monopoly has given them the leverage to bend the entire cluster to their whim. Representatives of the Carthaginian regime have been recurring villains throughout the campaign, and the Carthaginian Consultancy is their most omnipresent face. It is the Consultancy’s job to see to it that every FTL (“slipstream”) drive remains kept out of non-Carthaginian hands, with every ship leased to another system coming with a Consultant to keep an eye on it. They also hold the secrets of slipstream travel itself, the secrets that must be torn from Carthage’s grasp if the rest of the cluster is to have a chance to oppose them.

This, along with several other personal vendettas that would take much longer to explain, is why the player party elected to stage an assault on the Carthaginian Consultancy’s Customer Care Centre (C5). After more than 30 sessions of exposure to Carthaginian abuse, enough was enough, and the theft of government secrets via full-scale industrial espionage seemed the only way to fight back effectively.

The heist itself was a complicated, multi-tiered operation, with the party split in three. Most of the players formed a “strike team” tasked with actually stealing the critical information, posing as security to get inside the building, and attacking from within when the target was in reach. In the end, they obtained the information they wanted and released it to the public, but not without cost. The injuries sustained whilst fleeing from the Consultancy’s security were severe, and perilously close to fatal.

Meanwhile, one of the PCs tagged along with a second group of anti-Carthaginian fanatics, who intended to not only steal information, but also detonate a bomb on the way out that would level the building with huge civilian casualties. At the same time, the ship’s captain confronted the Consultancy’s evil figurehead for a tense exchange, that was effectively a diversion to draw attention away from the real strike team. The two PCs ultimately united to stop the bomb, but were left behind by the strike team, and captured by the Carthaginians. Though the captain had maintained a sufficiently low profile to appear as an innocent victim, the other PC was set-up for all the crimes of the bomb-makers, and was forced to fake his death in order to escape alive.

When designing a major heist for a Fate Core game, or any other kind of high-stakes set piece action sequence, there are a number of tools that GMs can employ to make the scene a little different, and to give the players something extra to worry about it.

Stress tracks are a great way to raise tension with a ticking clock or equivalent. All conflicts in Fate Core use them – ultimately, most fights are won by whoever can “take out” the other side’s physical stress tracks first. But there are plenty of things that stress tracks can be used for besides injury and social embarrassment. For the assault on C5, we used a bonus three:

I didn’t include a suspicion track for the bomb-maker team, because NPCs rolling against NPCs is boring, and I figured the PC amongst them could always easily blow their cover whenever he wanted. I also didn’t include an extra stress track for the captain’s encounter with the campaign villain, since that was already being modelled as a mental conflict anyway. The data track worked in exactly the same way as in our spaceship combat rules.

Though we didn’t use any of these, other ideas for alternate stress tracks in Fate Core include:

Stress tracks are a useful way of timing critical actions, because it uses a mechanic that all Fate players are already familiar with. However, there are a few more rules calls to make as a GM before you port that mechanic straight across.

Make sure all players are clear what skills can be used to attack or defend a non-conventional stress track. It is especially important to be explicit when using skills that cannot normally be used for attack or defend actions. For our alertness track, we used Empathy-vs-Deceive or Notice-vs-Stealth depending on context, though one player had a stunt that allowed him to use Provoke instead of Empathy for sheer bolshiness. The suspicion track was also attacked with Empathy-vs-Deceive, whilst the data track was handled with Intrusion-vs-Technology.

You need to work out how long you want each stress track to be, and how many consequences. You may be able to derive the number of boxes from the PCs’ skill rating, exactly the same as physical or mental stress track. This is how we did it for the Consultancy mission – two stress boxes for the alertness and suspicion tracks, with a bonus 3-stress box for the defender if they had Stealth/Deceive at +1 or +2, a bonus 4-stress box they could use if their skills were +3 or +4, and an extra mild consequence they could use if their skill was +5 or higher. The data stress track I set at a neutral three boxes. Acting mainly on instinct, I gave mild and moderate consequences to the suspicion and data stress boxes. I also gave a severe consequence for the alertness track, because I expected it to be tested earlier, and the consequences of its failure were more severe.

Give players an idea of how often you’ll be attacking each stress track, since you won’t necessarily be acting in structured conflict time for the entirety of the heist. I hinted that I’d be attacking the alertness and suspicion stress tracks approximately once for every three PC rolls, with extra rolls for particularly suspicious behaviour, and a one-roll-every-turn rule for when physical conflicts broke out (which are loud, intense and scary!).

And finally, make sure everyone knows what happens when a stress track is “taken out”. For the suspicion track, I was relatively lenient – being “taken out” would result in an immediate physical conflict breaking out between the PC and the rest of his supposed allies. But I really wanted the altertness track to be a countdown to game over. For that, I therefore established a rule that being taken out would result in IMMEDIATE capture by overwhelming numbers of security forces, or death for those unwilling to be taken alive. Obviously, the two stress tracks were sharply distinct in this respect, and it is important to make sure this is understood by all players. Concessions have to be offered before dice are rolled. The last thing you want is for dice to be rolled, players taken out, the penalty to be far greater than players expected, and anger comes the GM’s way that they didn’t get a chance to concede instead.

If the player party is split over a large arena, you will probably find it useful to prepare a map in advance, with tokens to mark the progress of each character. Even if you never end up using the actual rules for zones as though it were a conventional conflict, it’s still a good visual way to keep track of what’s going on in a complicated environment.

See below the photos taken at the halfway point of the heist, that indicates the progress each character had made. 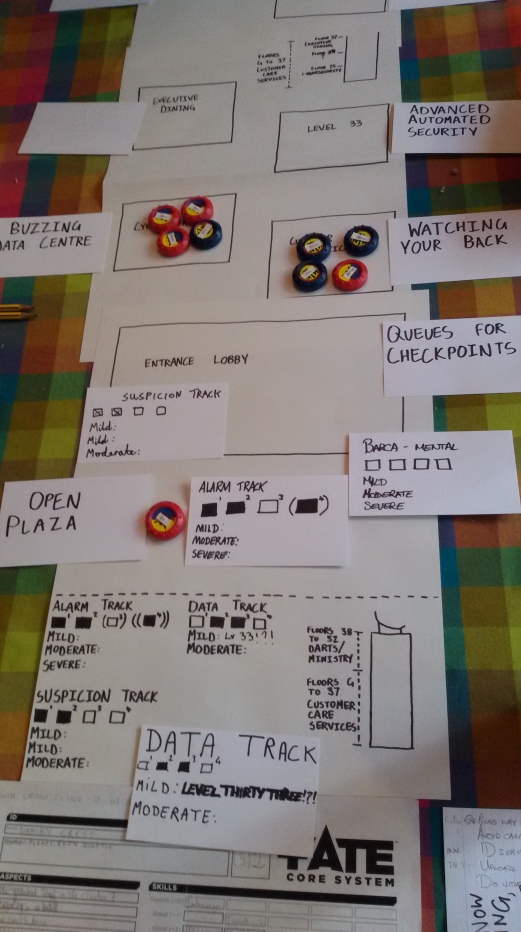 The final thing to work out for a huge conflict is how long a “scene” should last for. A scene is a mechanical term in Fate Core, and the end of one is a mini-milestone in its own right. Players rely on the end of scenes to clear their stress boxes and collect fate points for compels they took during the previous scene. On the other hand, the end of a scene is also when the GM gets to refresh their pool of fate points, so the end of a scene can be a double-edged sword.

Usually in Fate Core, an entire conflict is resolved as one scene, but that can become extremely long if you count all attacks against, say, our alertness track as all taking place in the same conflict. I don’t have any perfect advice for this, but here is the rough gauge we used:

To be honest though, I’ve never been great at knowing when to end things, which is why this blog post ends so abruptly.

One thought on “Ferrymen: Attack on C5 (and other heists in Fate)”