Why all the hate for custom dice? Ok, so Fantasy Flight Games aren’t model examples – overcharging for dice packs, limiting the number of dice per pack, covering the dice with bizarre hieroglyphics. But tailoring dice to better fit a setting or gameplay style is a useful design tool, and the Star Wars RPG range is a great demonstration of how to do this well. 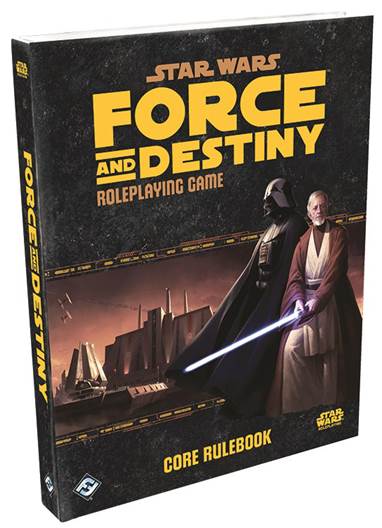 Here’s an example. Most actions in Force and Destiny are resolved by assembling pools of positive and negative dice, but the titular Force powers are special. You roll a single die with either white or black pips on each face; Jedi need white pips to succeed, unless you give into your hate and sacrifice group resources to count black pips as successes too. Some faces have two pips instead of one, which makes them more powerful… and what’s really cool is that the Force die has more faces with black pips than white ones, but the faces with white pips are more likely to have two pips on them. Consequently, the Dark Side is easier, but it is NOT more powerful. Isn’t that fantastic?

Confession time: large rulebooks scare me. I like to spend time gaming, not reading game books, and my love/hate relationship with the 40K RPG taught me to associate thick tomes with clunky, overdesigned rulesets. Force and Destiny’s core mechanics are intuitive, once you’ve learned the language of funny dice symbols, but the fiddly sub-systems around the edges are less inspiring. Morality is reductive. Vehicle combat is undynamic and scales horribly. And why are there rules for several different types of armour? Can you reference any occasion in all seven movies where armour protected its wearer? If armour in Star Wars was worth-a-damn, why don’t the heroes wear any?

FFG’s Star Wars RPG is artificially divided into three distinct game lines: one for scoundrels, one for Rebels, and one for Force users. Compared to the other core rulebooks, Force and Destiny’s lists of vehicle and NPCs seem a bit thin and obscure. I guess the plan is you’re supposed to buy all three to get all the content, which is extortion, frankly. But if you’d never dream of exploring Star Wars without a lightsaber close to hand, this will function as a self-contained product. Better yet, it succeeds as one of the most exciting mainstream RPG releases of the last year.

On Hold in Lockdown

Pirates of the Atabean (7th Sea)