My debut visit to the UK Games Expo was a bittersweet occasion – a band-aid to ease the irritation of not being able to visit GenCon 2015. This year my attendance was much more celebratory. Since I am attending GenCon, and returning to Nine Worlds as well, the UKGE marks the start of my convention season, which I’ve been looking forward to all year!

The really exciting thing about the UKGE specifically is being on the frontline of something exploding in popularity. 2016 was the first time the event spread beyond the NEC Hilton Hotel, and into the NEC itself – a godsend to those fearing the massive crowds swarming the sales rooms that were otherwise unavoidable last year. If anything, I’d expect even more of the NEC to be booked out next year. The convention’s own post-action press statement estimates 12500 unique attendees (up 40% from last year), and that it now ranks as the third or fourth biggest “hobby gaming” convention in the world. Given the impenetrability of the term “hobby gaming”, I couldn’t even hazard a guess what first and second (and third?) conventions are.

I wasn’t able to attend the con on Friday, but unlike last year, I booked a hotel room on Friday night so I could get started with Saturday gaming as early as possible. Special mention must go to the Britannia Hotel Birmingham, the place I stayed, which is undoubtedly the worst hotel I have ever booked in my life. Thin walls, rowdy neighbours, dingy lighting, torn wallpaper, damp and chewing-gum-imprinted furniture all made for a normal, mundane, terrible experience – but the creepy painting opposite the bed, of a woman with undead-green skin and cold black eyes watching us sleep, elevated the horror to a supernatural level. We tried taking down the painting, but it was screwed into the wall. So we tried hanging a shirt over it, which was MUCH WORSE, because I was terrified the shirt would fall off and the painting underneath would have moved. I’m so glad I got to stay in this room, because now I can tell stories about it for the rest of my life. 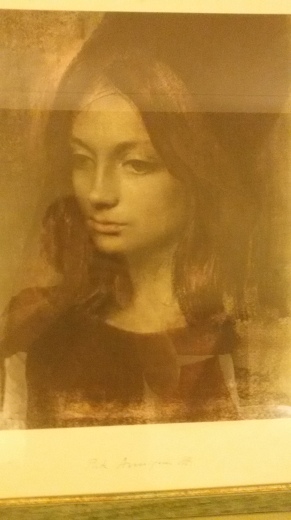 The reflection in the picture is me taking the photo, or possibly the Trapped Spirits of the Damned. Either/or.

Thankfully the actual convention was much more fun, and much less haunted by petrifying horror… 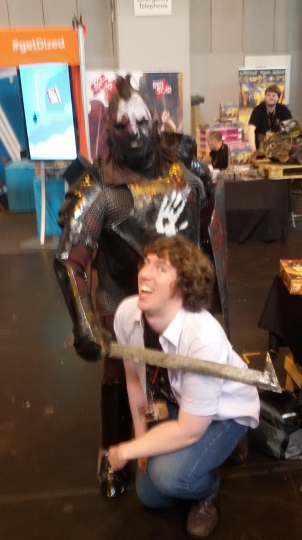 I also survived a blurry encounter with the Fighting Uruk-Hai.

After a brief sleep at Bates Motel, I was up bright and early to do the one thing I completely failed to do last year: play in an RPG.

Will I go next year? Yes, definitely. Maybe for all three days if I can swing it: I’d have liked to both roleplay more and get more time in the board games library, plus some of the events on Friday were a real shame to miss. Mostly I feel honour-bound to try my hand at GM’ing something. The convention needs more GMs, and the only reason I haven’t volunteered already is because I already don’t have time for all the things I want to do. To make it work, all I have to do is sacrifice some boring real-world time and replace it with roleplay geeking. Which sounds like a win-win!

On Hold in Lockdown

Pirates of the Atabean (7th Sea)